This diary will cover the next 12 months while I am the artist in residence at the National Maritime Museum Cornwall. I have made a proposal for an exhibition of sculptures which will be inspired by the museum collection of small boats. I now have to try to make this happen!

I suppose it all began with Norman. 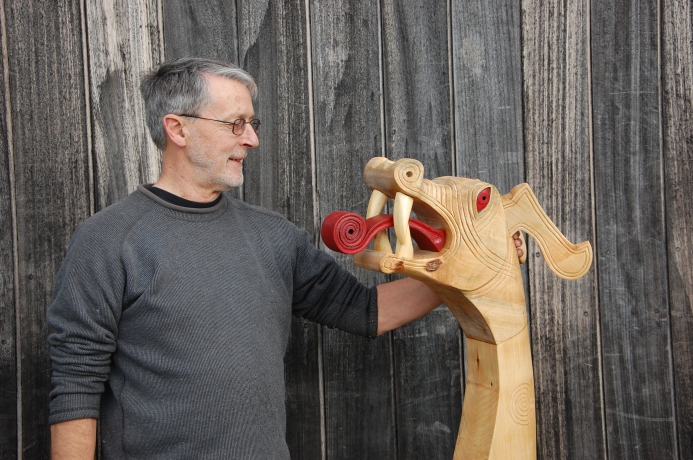 Norman is a Viking figurehead

I was asked to make a figurehead for a replica Viking boat which was to be used by the British Museum as part of their Viking exhibition. He was carved out of lime wood and was based on a small bronze Viking dress pin which was part of the London exhibition. He left Falmouth and is somewhere up-country now with a Viking re-enactment group I believe.

And then there was Ernie

This is Ernie the second figurehead

Ernie was commissioned by the NMMC to head-up their own Vikings exhibition which opened March 2015. In researching a suitable image, I found one of the few remaining wooden Viking carvings existing today. It has been preserved in the doorway to a church in Urnes Southern Norway.

Carving on the door of the Urnes stave church

There is evidence that the Vikings used iron curls down the back of one of their figureheads and of course the Urnes church beast has its own wooden ones. The pear- shaped eye and the spiral hip are also typical Viking designs. I enjoyed making my eye from a piece of an abalone shell.

Ernie on his viking ship prow in the museum